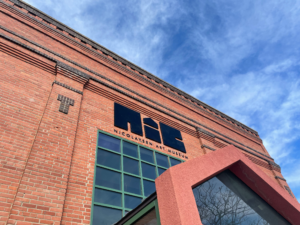 The Nicolaysen Art Museum began as a gallery 55 years ago in a small house a few blocks from where the museum stands today in downtown Casper.

The Nicolaysen Art Museum now features nine galleries and a permanent collection of more than 8,000 works. The museum’s Doran & Nancy Boston Discovery Center offers a creative play area for families as well as children’s classes and workshops for all ages.

How did the Nicolaysen grow from the tiny, volunteer-run gallery into a 25,000-square-foot home?

It all started when Mary Durham and her friends in 1967 opened a nonprofit art gallery in a little white house on the corner of Park and A streets, according to museum records. They named it “Gallery A.”

The nonprofit in 1972 moved into a former bus station building under its new name, the Central Wyoming Art Museum. The 7,000 square-foot building offered larger exhibit space and room for educational programs. But the museum struggled with mortgage payments. Casper area rancher Gerald G. Nicolaysen paid off the mortgage, and the board of trustees renamed the museum after him, according to museum records.

The nonprofit continued to grow in 1981 with its first professionally trained executive director, James Boatner. Another big milestone was a large exhibition of Charles Russel’s works in 1981 funded by the Wyoming Arts Council. The show “demonstrated to thousands of people throughout central Wyoming that the Nicolaysen Art Museum intended to play a much larger role in their cultural life than it had formerly,” according to museum records. The children’s center opened in 1985.

Renovation began in 1989 to turn the former Casper Lumber Company into the museum’s permeant home on Collins Drive. The building before that had housed Casper’s first electric company. After the 330-day, 2.6 million project, the new museum building opened on April 6, 1990.

Work and plans for the building had begun a few years prior. The board of directors president George Bryce presented a proposal to the City of Casper with his study of the need for a full-scale regional museum, according to museum records. The board in 1984 approached the One Cent Commission, which eventually provided $3,000,000 to build the facility. The city Planning Commission in 1987 approved the site.

The Nicolaysen Art Museums in 2009 received accreditation from the American Association of Museums. The process leads to sustained organizational improvement and a clearer sense of purpose, according to the museum records.

The museum continues to be recognized in its community, including last year winning the Casper Star Tribune’s Readers Choice Award for Best Gallery.

Elysia works at the Nicolaysen Art Museum front desk and writes the museum blog. During her time as a newspaper reporter, she was recognized with several top Wyoming Press Association awards for arts and feature-writing. Elysia grew up in Wyoming and enjoys art, music, hiking, bicycling, and reading.