Shelby Shadwell at the NIC 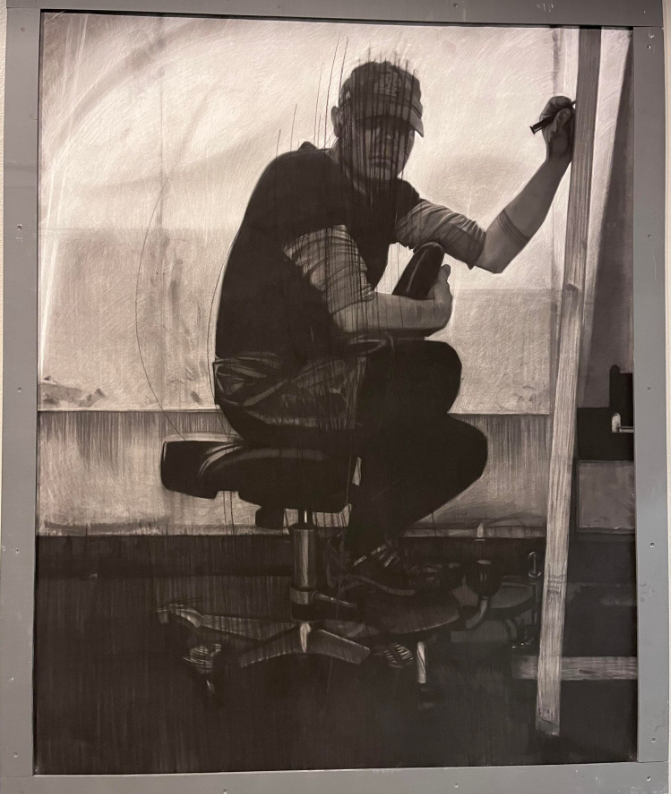 When you think of wildlife art, a gut pile probably isn’t the image that comes to mind. However, the parts of animals left from game hunts are the subject of Shelby Shadwell’s main body of work in his exhibition, “Visceral.” The show features large charcoal drawings and is on display through December in the NIC’s McMurry Gallery.

Shadwell is an associate professor at the University of Wyoming who exhibits across the country and has received the Wyoming Arts Council’s Visual Arts Fellowship two times, according to thenic.org.

The drawings of gut piles comprise his most recent body of work and the one he’s most excited to show in this state, he said. These works stem from Shadwell’s previous creative explorations into personal and collective fears and anxieties, according to his artist statement.

These works delve into the ethical implications of hunting and consuming animals. As someone who’s been vegan and now eats meat that he hunts since moving to Wyoming 15 years ago, he knows both sides of a polarizing issue. People have strong feelings about animals, the environment and what we eat, he said while discussing his art for this blog.

“Although I am part of the hunting community, I am trying not to be didactic or moralizing with the work in any way,” he said in his artist statement. “Instead, my aim is to be visually poetic, drawing attention to conflicts in the human condition and asking viewers to question preconceived notions on all sides of these and adjacent issues.”

The works are a response to how wildlife typically appears in art as well.

“I’m depicting these animals in a very different way than is traditionally found,” he said. “It’s kind of challenging romanticized and traditional versions of how we see these animals in artwork usually. And that’s the other reason I want to show it in Wyoming, and I think it’s important in the West, is showing an alternative way of looking at these animals.”

His artist statement describes his approach to honor the animals “by documenting less utilized aspects of their bodies in a symbolic attempt to let as little as possible go to waste.”

“Visceral” also highlights some of Shadwell’s earlier bodies of work, including drawings of flies and cockroaches. The subject matter was a cathartic way to deal with entomophobia, the fear of insects, he said. As with the gut pile drawings, there’s a contrast between a beautiful, meticulous rendering versus the gross subject matter, he said.

“So by drawing it, I’m facing that repulsion, but I’m also drawing it in a way that it, in some ways, can be considered beautiful.”

He referred in his artist statement to this effect of eliciting disgust and awe at the same time as “a kind of reverse sublimity.”

His earliest works in the exhibition are charcoal drawings of trash bags inspired by the artist’s dislike for trash and disorganization. These too were a way to deal with his fears and anxieties. A charcoal drawing of a deer head in a trash bag is his most traditional version of wildlife and he hopes it ties together with the other works so that they’re not too abstract.

Shadwell is known for his realistic, detailed art. But even the most realistic representations of objects all break down into abstraction when you look closely because shapes and marks combine to create an illusion, he said. It fascinates him that human vision allows us to see illusions such as three-dimensional objects on a two-dimensional surface.

Not only that, but people tend to see patterns and recognizable shapes within the abstractions, which are random. Viewers even spot “faces” in many of Shadwell’s pieces, an example of pareidolia, he said.

“We see things that are random and then we’ll find order, we’ll find meaning in it, even if it doesn’t exist.”

Shadwell thinks about these kinds of things while he’s creating his art. The ability to see patterns helps people solve problems and be creative, but also can become magical thinking and conspiracy theories, he said.

“It’s wonderful that we do that, and it’s also terrible,” he said.

Three charcoal drawings in the show present a different theme and were part of a collaboration between Shadwell and two other UW faculty: assistant professor and digital artist Brandon Gellis and associate professor Tom Minckley, a biogeographer and palynologist.

Shadwell depicted pollen spores with landscapes from the Wyoming locations where they were collected. His use of circular shapes, like the view through a microscope or binoculars, conveys looking at the landscape through the lens of pollen. His work represents Minckley’s scientific research into understanding the landscape during periods of geologic time by studying tiny grains of pollen, he said. Shadwell used actual grains of pollen in the drawings.

The artist’s note in the gallery details more about his work to interpret the scientific process in a visually poetic way.

Shadwell’s art medium itself relates to ideas and themes in “Visceral.” Charcoal is carbon and once was a living thing, usually a plant. The material is fragile and prone to structural decay, and “animal viscera in the field absorbs back into the ground almost overnight,” he said in his artist statement.

“Both are deeply ephemeral concepts in relation to life, death, and the precariousness of existence.”

You can find out more about Shadwell and his “Visceral” exhibition at https://thenic.org/xg_portfolio/visceral-shelby-shadwell/. He also can be found at shelbyshadwell.org and is on Instagram and Facebook.