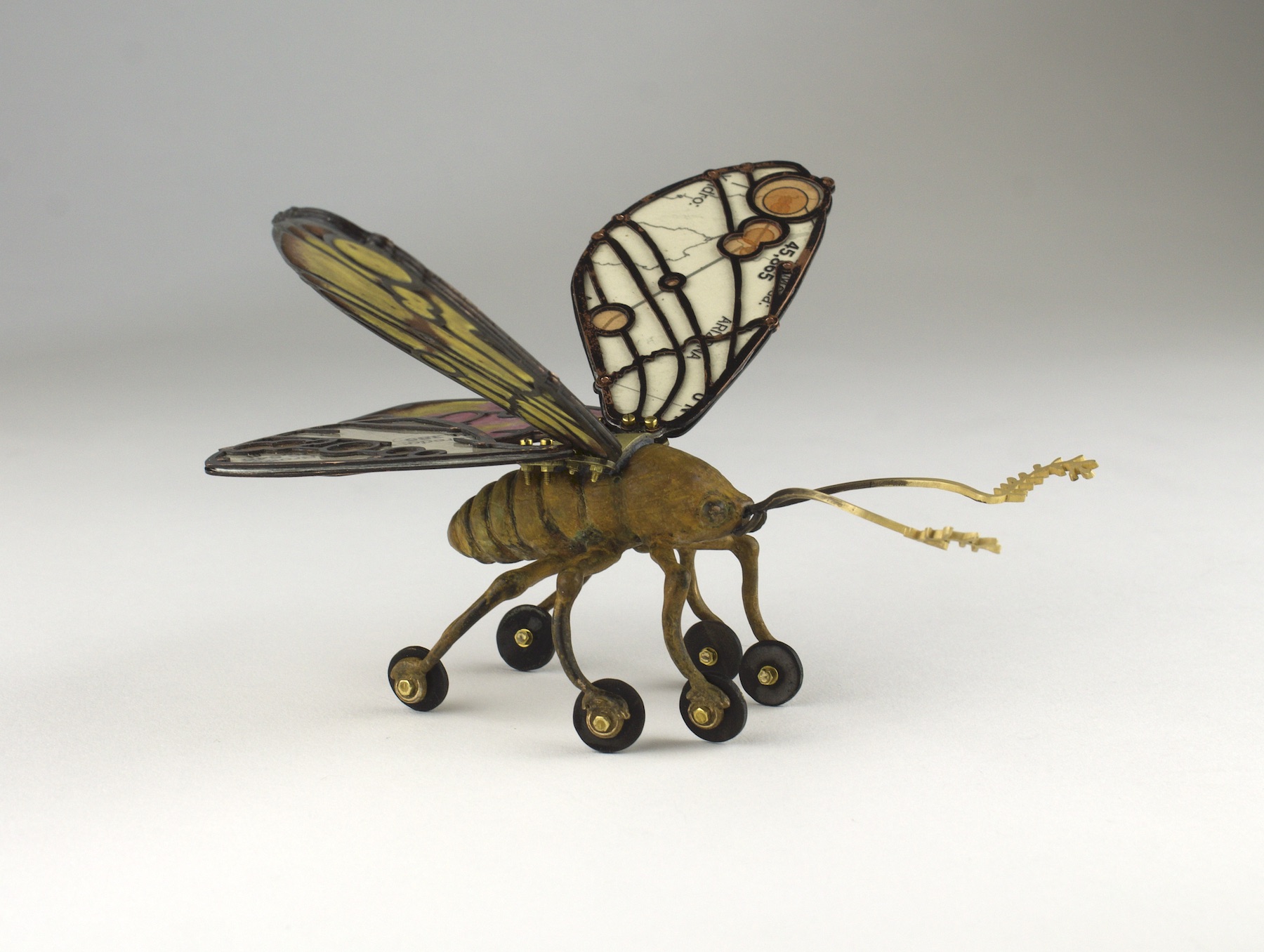 Fragmented, altered with mechanical elements or re-contextualized, these insect forms reference our fascination with mortality and desire with the underlying yearning to connect and communicate.  These life forms become metaphors for the present human condition and serve as an ethical inquiry into the lengths that humankind will go to in order to gain personal and political power, to push technology further in genetically modifying our food, altering our bodies and prolonging life. The intention is that of contemplation; there are no clear-cut answers.

How in the world did I end up here? Sometimes I ask this question as most people do. . .maybe as artists specifically since we look at the world through a lens of wonder, curiosity and inquiry.  Growing up in eastern Kansas, I treasured the summers—hot, humid with the smell of corn and freshly baled hay.  I spent endless hours outdoors planting and picking flowers and watching insects.  By day I especially was mindful of the grasshoppers, butterflies and Japanese garden spiders.  Late afternoon brought the sphinx or hummingbird moths.  My sister and I would crouch in the four-o-clock flowers gently holding the slender end of the deep flower throat waiting for the few seconds that the moth would choose our flower and reach deep in with its proboscis to drink nectar while vibrating our fingertips.  After dark we chased after fireflies, often catching a few in a jar to have by our bedsides during the night, to carefully release them the next morning.  Our mom helped us each summer collect milkweed plants to feed the voracious appetites of Monarch butterfly caterpillars which we raised indoors from egg to caterpillar to chrysalis to fully hatched butterfly.  Releasing the orange and black velvet beauties was the pinnacle of our experience.  Often the Monarch would slowly rest to pump fluid into its wings and fully dry before leisurely flying around our yard for a few hours prior to really taking its first longer flight.

Fast forward (a few years):  earning a BFA and MFA in Art provided a foundation for a strong artistic practice, teaching and traveling.  It is difficult to pull these elements apart as they are intersectional and feed one another.  Earlier work in ceramic sculpture often manifested in shrine-like pieces; now, and for the last bulk of a decade I have returned to my childhood passion for insects.  Often, I have relied on entomological collections as visual reference, but in 2017 I spent almost five months in New Zealand and Australia on sabbatical and began to set up a UV light and white screen to attract insects at night to photograph.  I organized a camel trek in South Australia and invited artists from New Zealand and Australia to participate.  The project, In Camels Footsteps, started with a five-day trek in the wilderness with camels to experience the bush land and then manifested in a traveling exhibition in Adelaide and Sydney of art made in response to each of our experiences.  My pieces were based on insects and true bugs encountered during the day and photographed at night on my white screen.  Although the fruition of this project was wrapped up with the two exhibitions in Australia in 2018, I have continued to photograph insects on which I base my metal pieces.  Northwestern Australia, Costa Rica and New Mexico/Arizona have been some of my favorite spots for photographing insects.

The work I will be exhibiting at the Nicolaysen will be a sampling of insect-based work.  While I use these insects as metaphors in my work with ethical questions (in my statement at top of page), I also believe that the work can simply stand as interesting interpretations of insects, especially in a child’s eye.  I tap into the aesthetic of tin toys as some of the insects are on wheels or have micro-hardware embedded into the joints.  The intimate scale offers something that one can hold in one’s hand and enjoy.  The allusion to specimens is very intentional.  Through deep looking at specimens, one can learn much or be drawn into a diminutive world.

Technically, many of the pieces are cast in bronze and/or fabricated from sheet metal and wire.  Handmade rivets and micro hardware are often employed in many of the pieces.  Color is generally achieved with patinas with some other pigments being applied.  Sometimes I expand my material vocabulary to include other media such as glass, mica, wood or cloth.  Often these materials can provide a variety of textures and weights that contrast with and complement the metal.