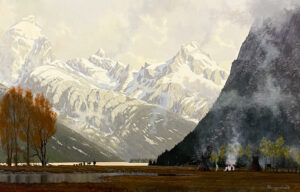 The new exhibition “Creating the West” sponsored by Wattis Ranch fills the main gallery of the Nicolaysen Art Museum with stories told through Western art. The show on display through April 16th is designed for visitors to relax and explore more than a century of Western art, including works by many famous artists of the genre. Tales of the Oregon Trail, cowpunching, and a romantic nocturne painting of a cowboy traveling by night on horseback are just a few of the stories Nicolaysen Art Museum Director Andy Couch pointed out on a recent stroll through the gallery for this blog post.

The introduction at the gallery entrance tells visitors that Western art is particularly known for its ability to tell stories: “Each painting, each sculpture tells a specific narrative of life in the west. A reoccurring theme in many works by western artists is the creation of the west, a romance of what the west once was and the fantasies surrounding it. These dreams draw people to western art and tell us why these stories have such an enduring legacy.”

Visitors can take a seat at comfortable chairs in the gallery and delve into even more stories with books from the museum library about some of the Western artists represented in the exhibition.

“Creating the West” spotlights treasures from the museum’s permanent collection that people don’t often have a chance to see, Nic Curator Amanda Yonker said. About 15 percent of the exhibition is on loan from private collections.

Visitors will find works by famous artists, such as Frederic Remington and Charles M. Russell. Several other Western masters represented in the show include Albert Bierstadt and W.R. Leigh, who was known as the “Sagebrush Rembrandt,” Andy said.

Along with W.R. Leigh’s work is a copy of a rare 1908 Cosmopolitan Magazine that features an H.G. Wells story about Martians with Leigh’s illustrations. “This illustrated story is one example of several connections found in Leigh’s work where the American west meets Science Fiction,” according to the display label.

The museum is planning talks with staff and academics about Western art in the collection. The first talk will be on the crossover between the genre and science fiction on Thursday, March 31st at 5:30 PM.

The show spans from an 1883 painting by Thomas Moran to contemporary art that continues to tell stories of the West. A 2008 sculpture by Tracey Linder, for example, incorporates real work gloves that anyone familiar with ranching and farming culture would recognize. “These gloves remind me of a lot of hard work,” he said. Andy’s family owns a ranch in southwestern Oklahoma, and they use gloves just like these.

“You can tell through the bronzes, and the sculptures on display, that the romanticism of the west is alive in our galleries,” he said. Many of the artists and stories in the show are tied to Wyoming. There are works by Harry Jackson, who was widely known and spent seven decades in the state. There’s also a 1911 painting by Allen Tupper True, whose bucking horse drawing has been the Wyoming license plate logo since 1936. Conrad Schwiering’s former studio in Jackson Hole, Wyoming, is recreated in the gallery complete with his own furniture, hat, painting supplies, sketches, and other belongings donated to the museum’s permanent collection. He was best known for his dramatic scenes of the Tetons.
Visitors may use magnifying glasses provided in the gallery to view details in miniature art etchings and engravings by artists including Hans Kleiber and William “Bill” Gollings, who many years ago had studios in Sheridan, Wyoming. People will see more recent works from Wyoming as well, among them 2021 Wyoming Governor Arts Award recipient James Bama and several Casper artists.

“This is one of the most impressive shows I think the Nic has ever had,” Andy said. “It really does tie in some of our local favorites — you know, Shawn Rivett, Jim Kopp, Zak Pullen — and we get to show them alongside Frederic Remington and Charlie Russell. It’s nice to bring out the West from our vault.”

Elysia works at the Nicolaysen Art Museum front desk and writes the museum blog. During her time as a newspaper reporter, she was recognized with several top Wyoming Press Association awards for arts and feature-writing. Elysia grew up in Wyoming and enjoys art, music, hiking, bicycling, and reading.